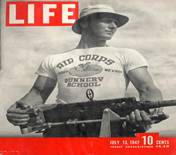 A T-shirt (or tee shirt) is a shirt, usually buttonless, collarless and pocketless, with a round neck and short sleeves, pulled on over the head. There are also long-sleeved T-shirt and sleeveless T-shirt variants. It’s hard to imagine life without the t-shirt. Yet, “t-shirt” didn’t become a word in the English dictionary until the 1920’s and the style didn’t enter mainstream fashion until the 1960’s.T-shirts were invented in the early 1900s but they were never intended to be seen! They were designed as underwear for the American Navy to wear beneath woolly jumpers. They continued to be worn by the U.S. armed services as underwear until Hollywood stars James Dean and Marlon Brando shocked the world and wore them as outerwear in films.

Suddenly t-shirts were cool! These days it can be hard to find a plain t-shirt but it wasn’t until 1948 when the first t-shirt was made with a slogan on it;” Dew it with Dewey” t-shirts were made to promote the New York governor, Thomas E Dewey’s election campaign. By the fifties everyone was wearing t-shirts and companies had started sticking pictures and slogans on them and selling them as souvenirs. But the real breakthrough happened in 1959 when stretchy ink was invented. Since then there’s been no stopping them, from the anti-war slogans of the sixties, to the huge oversized t-shirts of the 80s and the tight tees of the 90s right up to the customized trend of the 00s.

Again there seems to be some discrepancy over dates, although most have the U.S. Navy issuing crew-necked, short-sleeved, white cotton undershirts around 1913. The newly created shirt allowed ease of movement and quick drying. By the 1920s the T-shirt had become an official tern in the American English Dictionary. By the late 1930s a couple of US retailers were marketing them, namely Hanes, Fruit of the Loom and Sears, Roebuck & Co. Apparently this blossoming fashion did have one setback - in 1934 Clark Gable took off his clothes to reveal no t-shirt at all in the comedy 'It Happened One Night.'. Nothing but a bare chest.

This it seems sent t-shirt sales plummeting for a while. Hollywood inevitably had the biggest impact on the classic tee with such iconic images as Brando's T-shirt in the 1951 'A Streetcar Named Desire' and James Dean's unforgettable white tee in 'Rebel Without a Cause' in 1955, which made t-shirt wearing cool and rebellious. This was followed by Elvis Presley and others adding to its popularity. Up until the 1950’s, t-shirts were still considered underwear, until John Wayne, Marlon Brando, and James Dean shocked Americans by wearing their “underwear” on T.V. In 1955, James Dean helped make the T-shirt a standard item of

clothing in Rebel Without a Cause. Advances in Screenprinting gave people the opportunity to print on T-shirts in the 1960’s. Tye dying also become popular in addition to other forms of the t-shirt, such as tank tops and muscle shirts. In the late sixties and seventies, people began to realize that printing on t-shirts could be a lucrative business. Rock and Roll bands and professional athletic teams started to make huge profits selling custom screen printed t-shirts.

The iron-on transfer made it easy to pick a design, pick a shirt, and combine the two using a household iron. The T-shirt store, as we know it, didn't exist until the early seventies. The iron-on transfer made it easy to mass-produce hundreds of different designs, and every mall and shopping center had a T-shirt shop. In the late seventies, a new photo-realistic iron-on transfer called a "litho transfer" was developed. It revolutionized the quality of the graphic images that could now be printed on t-shirts. One of the earliest litho transfers was of Farrah Fawcett. In the 60's people began to tie dye and screenprint the basic cotton T-Shirt making it an even bigger commercial success. Advances in printing and dying allowed more variety and the Tank Top, Muscle Shirt, Scoop Neck, V-Neck, and many other variations of the T-Shirt came in to fashion. T-shirts were soon seized upon by marketing professionals all over the world.

In 1965 Budweiser was the first to use the t shirt as a widespread marketing tool, and companies have been producing funny T-shirts with logo's and slogans ever since. The T-Shirt was inexpensive, in style, and could make any statement you cared to print. The American T-Shirt came into it's own during the late sixties and seventies. Rock and Roll bands began to realize that they could make significant amounts of money selling their T-Shirts. Professional Sports caught on and soon the officially licensed T-Shirt became hot merchandise. While Tee shirts became acceptable as everyday clothing in the 1970's it was punk rock that really sealed their position as the standard clothing of a disenfranchised youth.

Designers Vivienne Westwood and Malcolm McLaren chose the t-shirt as a uniform for their followers. "The t shirt was the foundation, the one thing that defined a look, if you were dealing with the street culture of the new generation. The T-shirt was the beginning of every shop we had in London. We always started with ' What's the T-shirt going to look like? ‘That was the defining moment”. Everything changed when T-shirts became an industry in the 1980s. The great graphics craze started when artists who had shunned the t-shirt now found a new canvas. The t-shirt has become a canvas of limitless self expression.

Finally to marketing the advertising world took a while to notice the shirt's human billboard potential. Ever the innovator, the military caught on first. As if jar-head haircuts weren't humiliating enough, the armed services began stenciling rank and company on T-shirts. About the same time, Ivy League schools clarified the student body pecking order by way of the imprimatur of school fraternities on tees. The first corporate-advertising tee didn't appear until the '60s, when Budweiser featured a can of Bud on the company's T-shirts.

Since then, however, advertisers have grown more savvy in terms of their demographics — especially the captive market of college students. The story of the message tee embraces the modern phenomenon of “personal branding” indicating, in this case, the wearer’s sense of humor, as well as a climate in which statements—political or personal—are generally preferred to be catchy than true .Notable was the popularity of political slogans and messages on T-shirts coinciding with the presidential election.